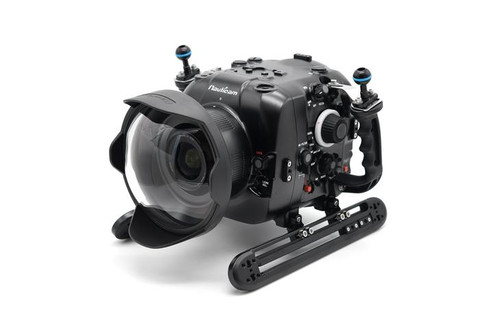 Canon describes their EOS C200 Cinema Camera as a "ready-to-go" production camera. The C200 couples a small form factor with the ability to capture 12bit RAW DCI 4K and access to use the full EF lens lineup. Nauticam has always been at the forefront of housing development for the modular cinema camera with housings for RED, BlackMagic and ARRI cameras. Nauticam continues the line now with the NA-C200 for the Canon C200.

Integrated into the camera are an in-camera Neutral Density filter which allow for 5 steps of neutral density at 2,4,6,8 and 10 stops as well as an electronic viewfinder that can closely recreate the ITU-R BT.2100 (PQ) standard for HDR allowing the cinematographer to more accurately see the full dynamic range of the image as it is being captured.

For the underwater video shooter there have alway been two major sticking points that "topside" cameras just didn't handle well when taken underwater, autofocus and white balance. The C200 is going to be popular with underwater shooters for precisely these two reasons as it features what has become known as "Canon Color" or Canon's unique ability to give better manual white balance results than any other camera manufacturer and Canon's Dual Pixel AF which uses two photodiodes behind each pixel to improve the camera's autofocus abilities.

Nauticam has long been producing industry-leading housings for Cinema cameras and have taken that experience to create the most advanced underwater cinema system housing available.

Taking advantage of the small form factor of the C200, the Nauticam NA-C200 is both ultra-portable yet offers full access to the camera's critical functions. Nauticam has taken a modular approach to the C200 system, similar to that of the DCS housings for RED and ARRI cameras with a wide variety of add-ons from top-handles to skids and movable trim weights.

The NA-C200 features multiple bulkhead openings for HDMI/SDI Bulkheads and when paired with the NA-502S allows for the use of the SmallHD 502 monitor with SDI support. In bright conditions or if a monitor is not called for, the EVF can be used and enhanced with a Nauticam magnifying viewfinder, available in either traditional 180º or angled 45º.

The housing includes the newest version of the venerable Nauticam Cinema Skids that feature tracks along which the accompanying trim weights can be moved to achieve perfect trim for the shot. Mounts on the housing itself also allow for direct attachment of the trim weights to allow for either a fixed trim or for when using tripod legs instead of the skids.

The housing will accommodate the Canon BP-A30 and larger BP-A60 batteries, providing plenty of run time. As with previous Cinema System housings, the Nauticam NA-C200 features large control knobs for focus and zoom also feature marking disks that can be removed and marked with the desired lens position or focus information.

The NA-C200 comes with the Nauticam Vacuum Check and Leak Detection electronics installed and with the addition of a vacuum valve gives temperature compensated (important for cinema cameras that generate significant sensor heat) visual indications via a large multi-color LED on the rear of the housing as to the watertightness of the system.

Connect the C200 to an external monitor or surface support with an HDMI or SDI bulkhead.

INTRODUCING NA-EVA1 THE PANASONIC AU-EVA1 5.7K SUPER 35 HANDHELD CINEMA CAMERA The compact and lightweight AU-EVA1 from Panasonic is the next model in the growing "production ready" compact...

The Canon EOS R6 is attractive to underwater image makers for a variety of reasons.  It is a 20MP full frame mirrorless camera that shoots up to 20fps, utilizes Canon's new...

NAUTICAM NA-A7RIII UNDERWATER HOUSING A professional housing befitting of a top-of-the-line camera, the NA-A7RIII underwater housing provides fingertip access to all key camera controls in a...

THE NAUTICAM NA-D850 UNDERWATER HOUSING Innovation, ergonomics, and reliability are the hallmarks of the Nauticam brand. Every new housing design is carefully crafted based on feedback from...

THE NAUTICAM NA-5DMKIV UNDERWATER HOUSING While physically extremely similar to the 5D Mark III and 5DS cameras that came before it, small dimensional changes in the Mark IV body forced a new...

The Retra LSD Ultimate is available to fit a number of different strobes. Please select your strobe for the correct strobe mount to be included. The package includes: LSD...

The WACP is a 0.36x Wide Angle Conversion Port. Unlike traditional ports or wet-mate corrective wide-angle optics, the WACP is a "dry" corrective optic that modifies a 28mm equivalent lens to an...